I’ve happened to exposure and interact with Lazada by various chance. While I was working for a leading digital product retail chain in a local market in SEA in 2011 – 2012 , Lazada had hunted three of my managers from SEO, Marketing, Product. Then after that I’ve been to Lazada offices in 5/6 countries in Southeast Asia and met all CEOs in each countries, mostly Lazada, sometimes Zalora and Foodpanda managing directors. I was even offered marketing positions in Lazada Indonesia and Lazada Thailand. After that I’ve interviewed some ex-CEO Lazada Indonesia, Thailand, Vietnam, Head of Marketing Southeast Asia… when they left Lazada to start their own startups.

These below content is curated and arranged from my experience.

Shopee vs Lazada: Who is more courteous and helpful to customers in the pandemic?

The number of channels via which consumers may reach you without issue and the speed with which a solution can be supplied are both important factors in providing excellent customer service. Every day, Lazada provides 15 hours of chat help (6 a.m. to 9 p.m.). The Lazada staff is also ready to answer quickly on Twitter.

On weekdays and weekends, Shopee’s phone support window is open for 12 hours and 9 hours, respectively. Customers of Shopee can communicate with one another via chat at any time. Another alternative is to ask questions over Facebook Messenger, which has a very high response rate.

Shopee has a little advantage over Lazada in terms of responsiveness.

Shopee vs Lazada: How Shoppe Aided Sellers in Surviving the Pandemic

The Seller Support Package by Shopee, which covered 300,000 small and medium-sized businesses developing an online presence, was a major sigh of relief in the pandemic. Shopee’s Seller Education Hub was a well-received project for the following reasons: It allowed 6000 sellers to gain a solid understanding of the fundamentals.

Alibaba increases its stake in Lazada

The slowing Chinese economy and increased competition have prompted the Chinese e-commerce giant Alibaba (BABA) to pursue globalization. Recently, the company’s founder, Jack Ma, came to the US to attract US businesses to sell on its websites.

In the latest move toward globalization, Alibaba has invested an additional $1 billion in Singapore-based e-commerce firm Lazada. The Chinese firm now holds an 83% stake compared with its previous 51% stake in the company. This values Lazada at ~$3.2 billion.

Southeast Asia’s dominant e-commerce player, Lazada, has joined hands with Unilever in hopes of grabbing a bigger slice of the region’s online retail market in fast-moving consumer goods that is projected to reach $25 billion by 2020.

As part of the deal, the two companies will work closely together on supply chain, fulfillment, data, marketing, social commerce and talent development to grow their business’ reach in the region.

“The goal is to find better ways to address the exploding middle class across Southeast Asia and communicate directly with them,” Maximilian Bittner, Lazada Group’s CEO told CNBC about the partnership.

CAPITALAND has tied up with two leading e-commerce players – Alibaba Group and Lazada Group – as it positions itself as an “omni-channel” retail landlord that connects retailers to shoppers offline and online.

CapitaLand said on Wednesday that it inked an agreement to manage Alibaba Shanghai Centre – the e-commerce giant’s new headquarters in Shanghai will comprise four office towers and a retail podium – to “reinvent modern retail through the seamless integration of offline and online (O&O) channels”.

In Singapore, the real estate stalwart signed a pact to launch an exclusive online mall on Lazada Singapore which is part of Lazada Group.

The shop-in-shop on Lazada.SG will position CapitaLand as Singapore’s first omni-channel retail landlord that connects retailers to shoppers both offline and online, complemented by a unique in-mall collection service for shoppers, said CapitaLand.

“Some customers prefer cash on delivery, some online transaction while other customers like to pick up their items there in the stores. Through this collaboration, we enable Malaysians to shop for over 12 million items available on our website, combining with the familiarity of paying over-the-counter at any 7-Eleven store nationwide,” he added.

7-Eleven is the number one convenience store chain in the country with more than 2,150 stores, serving over 900,000 customers daily.

KUALA LUMPUR, May 3 — In the last five years, the typical Malaysian online shopper has “transformed” from a young urban male to a family man. Or woman.

“When Lazada Malaysia was launched in March 2012, online shoppers consisted of mainly urban male youths aged between 18 to 23 who were constantly on the hunt for gadgets and cheap deals,” Hans-Peter Ressel, CEO of the popular online shopping platform, said.

“We also see a strong shift from electronic items to lifestyle, health, beauty and fashion related items. The share of electronic products is much smaller today.”

According to Ressel, Lazada attracts about 30 million visits to their website every month.

Last year, statistics portal Statista estimated the total revenue for the Malaysian e-commerce market would hit US$894 million (RM3.75 billion) with the revenue expected to see an annual growth rate of 23.7 per cent in the next five years.

At present, electronics and media make up the bulk of the e-commerce market with a volume of US$380 million (RM1.64 billion).
More detail: http://www.themalaymailonline.com/malaysia/article/lazada-ceo-while-online-sales-grows-most-shopping-is-still-done-in-stores#

Lazada’s goal has always been simple:  the company aimed to be the largest and most successful e-commerce site in Asia and be known as the Amazon of the East. At the moment, Lazada’s team is made up of over 7000 full-time employees. 5 million visitors visit the site daily through mobile app and desktop. Over 13 million users follow Lazada online, making it the top-ranked e-commerce company on social media today. Lazada is a significant retail channel that offers merchants and brands quality marketplace solutions and access to over 550 million consumers.

Under the deal worth approximately $1 billion, Alibaba will buy around $500 million worth of newly issued shares in Lazada, as well as acquire shares from some existing shareholders.

“With the investment in Lazada, Alibaba gains access to a platform with a large and growing consumer base outside China, a proven management team and a solid foundation for future growth in one of the most promising regions for e-commerce globally,” he said in a statement.

For now, eMarketer pointed out, Lazada Group dominates the eCommerce activity and web traffic in the markets it serves, which includes mainly in Indonesia, Malaysia, the Philippines, Singapore, Thailand and Vietnam.

MANILA, Philippines – Lazada Philippines co-founder and CEO Inanc Balci has a lot of reasons to be optimistic about the coming year.

Launched only three years ago in 2012, Lazada now offers an assortment of over 1.2 million products from over 4,500 merchants and 1,700 brands on its website. With 80 percent market share, the e-tailer is also now the country’s biggest e-tailer and is setting its sights on more aggressive targets anchored on three main pillars – large assortment of products, low prices best customer service.

Fresh from the success of the month-long ‘Online Revolution’ campaign that started on Nov 11, Balci  disclosed that during the start of the campaign, which coincided with the 11.11 Global Shopping Festival day itself, the e-commerce site has exceeded its targets.

Lazada sold more than 5,000 smartphones and 4,500 packs of disposable diapers. Sixty percent of orders are from mobile devices and 70 percent of total orders come from outside the national capital region.

“More and more customers are buying from mobile devices. Lazada is becoming a mobile commerce company and as mobile smartphone penetration is increasing we are selling more smartphones,” Balci said.

Lazada – which operates in Singapore, Malaysia, Indonesia, the Philippines, Thailand, and Vietnam – is on course to pull in about US$1 billion in annual gross merchandise volume (GMV) once 2015 ends. GMV is the value of items that shoppers buy.

GMV hit US$433 million in H1 of this year, which was up four-fold from the same period a year ago. 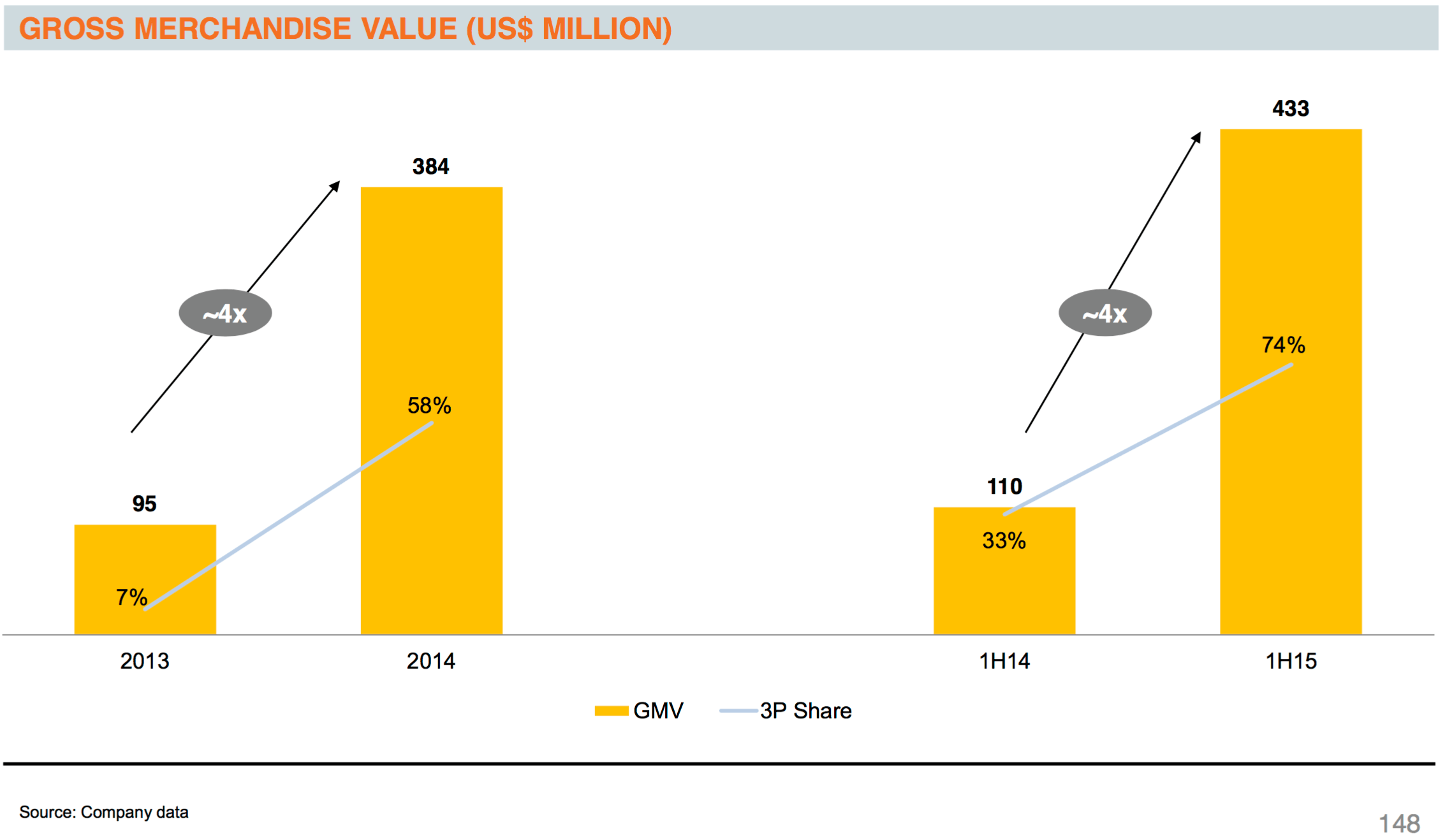 The estore has now largely shifted from directly selling items that it stocks to having an open marketplace, more like the Alibaba model with Taobao and Tmall. Lazada now has 27,000 active merchants and about 80 percent of consumer expenditure is from the marketplace.

That major shift to third-party merchants means that Lazada can save money on storing its own stock and instead shift that capital to helping merchants with logistics to ensure speedy delivery in a region hobbled by fragmented and poor infrastructure. Lazada has “fulfillment routes” across Southeast Asia, moving sellers’ items to 62 last-mile distribution hubs across its six nations to try speed up deliveries. That also reduces costs for shoppers as it minimizes shipping by air, the company points out in the slideshow of data it published today.

Rocket addressed that shift to mobile, saying that Lazada crossed a milestone in Q2 2015 as more than half of the spending total came from mobile. Mobile GMW was 51 percent of total GMV in Q2, moving upwards further to 58 percent in August. 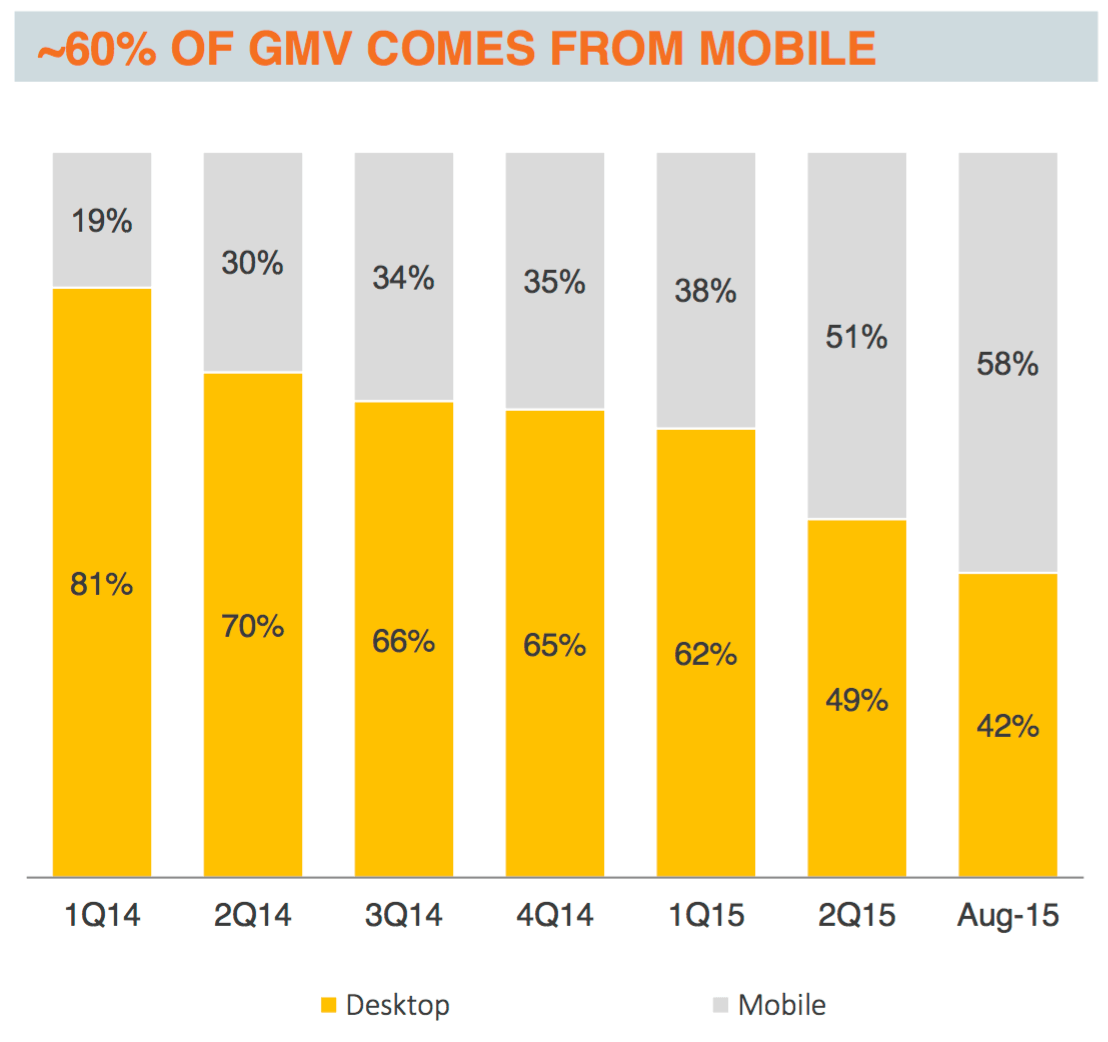 Lazada’s websites started out three years ago as inventory-based direct retailers–thus,”the Amazon of Southeast Asia” moniker. In the past year,  though, the switch to a primarily “marketplace” business model was the most significant driver of revenue growth, accounting for about 70% of Lazada’s monthly sales as of November last year.

Under a marketplace model–as followed by eBay, Thailand’s Rakuten Tarad , Malaysia’s Lelong and  Indonesia’s Blibli–third-party merchants and brands sell products from their own niches on a huge site. According to Rocket’s annual report, its marketplace sales increased 20-fold from January to December 2014. Lazada charges a commission on such sales.

E-commerce website Lazada’s revenue for 2014 reached VND524.5 billion ($24.4 million), or a five-fold increase against 2013 and double the average growth in the market.

March marks its 3rd anniversary of operations in Vietnam, notching up half a million customers in the process with more than 200 million hits and leading Vietnam’s e-commerce sector, according to CEO of Lazada Vietnam, Mr. Alexandre Dardy. In 2014 it sold 300,000 items and had over 1,500 individual vendors.

The Vietnam E-commerce and Information Technology Agency (VECITA) under the Ministry of Industry and Trade, reported recently that Lazada in Vietnam overcame 216 other e-commerce websites available in the country during 2014 to record the highest revenue, accounting for 31.6 per cent of the total.

As at the end of last year the Lazada Group had invested up to 200 million euros ($213.4 million) to develop six markets in ASEAN: Indonesia, Malaysia, the Philippines, Singapore, Thailand, and Vietnam.
More details: http://vneconomictimes.com/article/business/lazada-earns-highest-e-commerce-revenue

Lazada has just raised another US$100 million investment round and looks to conquer the region’s e-commerce scene. Here’s the company’s scoresheet, so far. 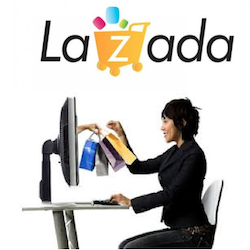 Published on: Jun 20, 2013 @ 18:12
Lazada, an Amazon-like marketplace headquartered in Indonesia, has just raised another US$100 million round of investment.

The investment round is participated by Holtzbrinck Ventures along with its existing investors Kinnevik, Summit Partners and Tengelmann Group. The funding round shows a huge vote of confidence by existing investors participating in the latest round: Kinnevik invested US$40 million in November 2012, Summit Partners added US$26 million in December 2012, and Tengelmann Group came in with around US$20 million back in January 2013.

Launched back in April 2012, Lazada has since expanded its presence and currently operates in Thailand, Vietnam, Malaysia, the Phillipines and Indonesia. Let’s take a closer look at how they are doing in these countries.